About the COT Reports

Antecedents of the Commitments of Traders (COT) reports can be traced all the way back to 1924. In that year, the U.S. Department of Agriculture’s Grain Futures Administration (predecessor to the USDA Commodity Exchange Authority, in turn the predecessor to the CFTC), published its first comprehensive annual report of hedging and speculation in regulated futures markets.

Beginning as of June 30, 1962, COT data were published each month. At the time, this report for 13 agricultural commodities was proclaimed as "another step forward in the policy of providing the public with current and basic data on futures market operations." Those original reports then were compiled on an end-of-month basis and published on the 11th or 12th calendar day of the following month.

Over the years, the CFTC has improved the Commitments of Traders reports in several ways as part of its continuing effort to better inform the public about futures markets.

The long report, in addition to the information in the short report, also groups the data by crop year, where appropriate, and shows the concentration of positions held by the largest four and eight traders. The Supplemental report is published for Futures-and-Options-Combined in selected agricultural markets and, in addition to showing all the information in the short format, shows positions of Index Traders.

Current and historical Commitments of Traders data is available on CFTC.gov, as is historical COT data going back to 1986 for Futures-Only reports, to 1995 for option-and-futures-combined reports, and to 2006 for the Supplemental report.

How to Read the Commitments of Traders reports

This sample is from the December 12, 2006, COT report (short format), published in the traditional format, showing data for the Chicago Board of Trade's (CBT) wheat futures contract. 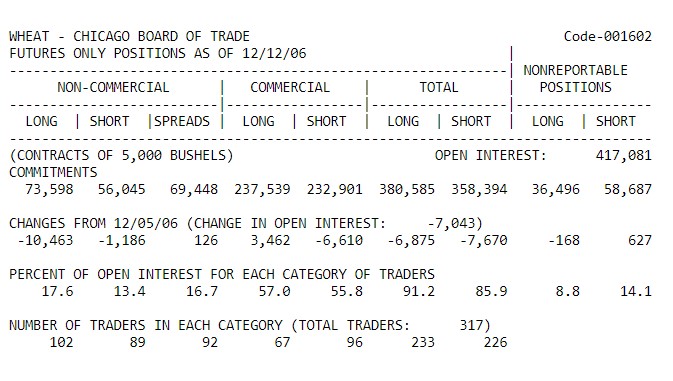 This is a sample of the same data reported for the CBT’s wheat futures contract in the CFTC Public Reporting Environment with the following filters applied:
Report Date as YYYY_MM-DD:  2 selected (2006 Report Week 50; 2006 Report Week 49)