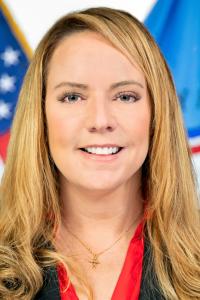 Summer K. Mersinger was nominated by President Biden to serve as a Commissioner of the Commodity Futures Trading Commission and was unanimously confirmed by the Senate. She was sworn into office on March 30, 2022.

Summer K. Mersinger was nominated by President Biden to serve as a Commissioner of the Commodity Futures Trading Commission and was unanimously confirmed by the Senate. She was sworn into office on March 30, 2022.

Prior to her appointment, Ms. Mersinger served as the Chief of Staff to CFTC Commissioner Dawn D. Stump.  She also served as the Director of the Office of Legislative and Intergovernmental Affairs at the Commodity Futures Trading Commission under former Chairman Heath Tarbert.

Ms. Mersinger has 20 years of Capitol Hill and government relations experience. Prior to joining the CFTC, she was Senior Vice President at Smith-Free Group, a leading government affairs practice, where she worked on financial services issues including advocating for large fintech organizations.

From 2004 to 2016, Ms. Mersinger was a top aide to current Senate Minority Whip John Thune, who represents her home state of South Dakota. Most recently she served as his DC Chief of Staff, coordinating legislative activities for Sen. Thune’s team and working regularly with Senate leadership and senior staff on both sides of the aisle. Ms. Mersinger was instrumental during policy debates involving banking, finance, telecommunications, surface transportation, agriculture, and trade issues. Ms. Mersinger was also directly involved in the communications efforts spearheaded by Sen. Thune through his leadership post on the Senate Republican Conference.

Prior to joining Sen. Thune’s staff, Ms. Mersinger was a director of government relations at Arent Fox, and she also worked in Sen. Thune’s office while he was a member of the U.S. House of Representatives from 1999 to 2002. Summer completed her undergraduate degree from the University of Minnesota and her law degree from the Catholic University’s Columbus School of law. She is a proud mother of four children, two daughters and two sons, and resides in Northern Virginia with her husband.

Chief of Staff and Counsel