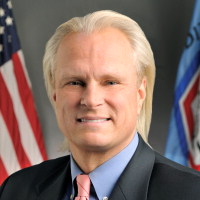 Bart Chilton was nominated by President Bush and confirmed by the U. S. Senate in 2007. In 2009, he was re-nominated by President Obama and reconfirmed by the Senate. He has served as the Chairman of the CFTC’s Energy and Environmental Markets Advisory Committee (EEMAC). His career spans 25 years in government service—working on Capitol Hill in the House of Representatives, in the Senate, and serving in the Executive Branch during the Clinton, Bush and Obama Administrations.

Prior to joining the CFTC, Mr. Chilton was the Chief of Staff and Vice President for Government Relations at the National Farmers Union where he represented family farmers. In 2005, Mr. Chilton was a Schedule C political appointee of President Bush at the U. S. Farm Credit Administration where he served as an Executive Assistant to the Board.  From 2001 to 2005, Mr. Chilton was a Senior Advisor to Senator Tom Daschle, the Democrat Leader of the United States Senate, where he worked on myriad issues including agriculture and transportation policy.

From 1995 to 2001, Mr. Chilton was a Schedule C political appointee of President Clinton where he rose to Deputy Chief of Staff to U. S. Secretary of Agriculture Dan Glickman. In this role, Mr. Chilton became a member of the Senior Executive Service (SES)—government executives selected for their leadership qualifications to serve in the key positions just below the most senior Presidential appointees. As an SES member, Mr. Chilton served as a liaison between Secretary Glickman and the Federal work force at USDA.

From 1985 to 1995, Mr. Chilton worked in the U. S. House of Representatives where he served as Legislative Director for three different Members of Congress on Capitol Hill and as the Executive Director of the bipartisan Congressional Rural Caucus.
Mr. Chilton previously served on the Boards of Directors of Bion Environmental Technologies and the Association of Family Farms.

Mr. Chilton was born in Delaware and spent his youth in Indiana, where he attended Purdue University (1979—1982). He studied political science and communications and was a collegiate leader of several organizations. Mr. Chilton and his wife, Sherry Daggett Chilton, split their time between Washington, D. C. and Arkansas.

On November 15, 2011, Commissioner Bart Chilton spoke at New York Law School about the perils of scams and Ponzi schemes. Commissioner Chilton recently authored a book on the subject, titled: Ponzimonium: How Scam Artists are Ripping Off America.

Ponzimonium: How Scam Artists are Ripping Off America

Find out more about Ponzimonium: How Scam Artists are Ripping Off America, the new book by Commissioner Chilton.