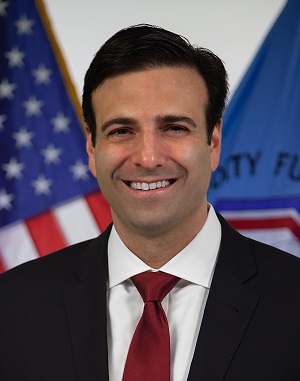 Dr. Heath P. Tarbert is a Commissioner and former Chairman and Chief Executive of the Commodity Futures Trading Commission. He was nominated for a term expiring on April 13, 2024 and took office on July 15, 2019. Commissioner Tarbert also serves as a Vice Chair of the International Organization of Securities Commissions (IOSCO) Board.

Commissioner Tarbert has extensive experience in financial services law and has served in senior leadership roles in the public and private sector. Most recently, he served as Chairman and Chief Executive of the CFTC from July 15, 2019 to January 21, 2021, overseeing the agency’s agenda and its roughly 1,000 personnel. As Chairman, he also served as a voting member of the Financial Stability Oversight Council (FSOC) and as a member of the President's Working Group on Financial Markets.

Prior to leading the CFTC, Commissioner Tarbert was Assistant Secretary for International Markets and subsequently acting Under Secretary for International Affairs at the U.S. Department of the Treasury. In these roles, he served as the G-7/G-20 Deputy Finance Minister, a member of the Financial Stability Board, and the co-chair of both the US-EU Financial Regulatory Forum and the US-UK Financial Regulatory Working Group. Prior to his service at the Treasury Department, Chairman Tarbert was head of the bank regulatory practice of Allen & Overy LLP, a leading global law firm.